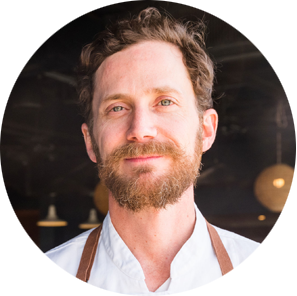 
Chef Adam Evans is the Executive Chef & Owner of Automatic Seafood & Oysters, which opened in April 2019 in Birmingham, AL. A Muscle Shoals native, Evans’ curiosity for and connection to food began in childhood, where he spent time planting, tending, and growing vegetables in the garden with his grandfather, and then cooking the harvests with his grandmother and mother. He relished the process of growing and cooking from start to finish, which ultimately led him towards a career as a chef.

Evans attended Auburn University, graduating with a degree in psychology in 2002. During his junior year, he decided to pursue a career in the kitchen and spent the following summers working as a line cook in Fairhope, AL at The Grand Hotel, which proved to be a valuable learning experience for his future. Evans’ culinary career would take him across the United States, first to New Orleans at age 21, where he landed a job at as a cook at BACCO and worked with classically trained French chef Gerard Maras to open Ralph’s on the Park within the same restaurant group. Yearning to further expand his personal and culinary horizons, Evans took several months to travel Europe before returning to New Orleans to cook at La Petite Grocery. In 2004, Evans left New Orleans to work under Tom Colicchio’s team at Craft in New York City. At the helm of all of the restaurant’s private events, Evans was able to work in almost every position, gaining experience from entry-level line cook to sous chef.

In 2009, Evans moved south to open Craft Atlanta as Chef de Cuisine for Craft Bar and later assisted with kitchen operations of Craft Los Angeles. Evans made his way back to Atlanta in 2012 to open The Optimist with Ford Fry as the restaurant’s Executive Chef. Here, Evans truly made his mark on Atlanta’s culinary landscape through his signature seafood dishes. Under his leadership, the restaurant earned national recognition, including Esquire’s Restaurant of the Year and Bon Appétit’s Top Ten Best New Restaurants. In 2015, Chef Evans opened Atlanta’s Brezza Cucina with Chef Jonathan Waxman before returning home to Birmingham in 2017 with the goal of opening his first restaurant with his wife, Suzanne Humphries Evans, who is Automatic Seafood & Oysters’ coowner and project designer.

After a year-long search, the couple found the perfect home for their restaurant in a 1940s warehouse in the Lakeview neighborhood of Birmingham, that in its mid-century heyday was home to the region's largest Automatic Sprinkler Corporation manufacturing facility. The restaurant’s menu will feature simple, high-quality seafood dishes, primarily sourced from the Gulf, which Evans’ will combine with bold flavors and classic technique. Comfortable, timeless, and elegant, the space at Automatic will lend itself to a coastally-inspired setting — not speaking directly to one specific body of water or region, but drawing upon Americana and shoreline culture of days past.