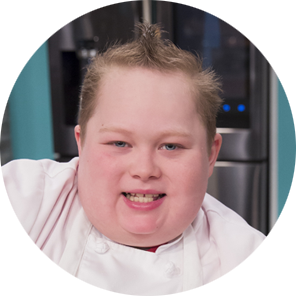 
Fuller Goldsmith, age 14, is an aspiring young chef.  In 2017 he competed on Food Network’s Chopped Junior, where he won the top prize of $10,000 and title Chopped Champion. Later that year he was named one of the top 12 junior chefs in the country, and went on to compete in another cooking competition on Universal Kids’ Top Chef Jr. Fuller was diagnosed with leukemia at age 3 and relapsed twice after that. In 2014 he underwent a bone marrow transplant at Children’s of Alabama and is cancer free today.

Fuller is continuing to use his culinary talents for both public and private events. He regularly volunteers at a local restaurant and is planning to attend the Culinary Institute of America after high school.